I rarely want to have a book on paper. This one… is my go-to source for inspiration. And like Murphy's Law, it's not available in print anymore.

Alan Sharpe shares what we can learn from the VW ads. These are lessons that you can’t read anywhere else. At least, I didn’t. Even though the VW ads are from the sixties and seventies, some secrets can be directly applied to today's content.

Why are these different? Alan unravels the VW secrets provided with clear examples. Easy to understand, practical, and therefore easy to implement.

Headlines are today's social caption or title for a content item

Please note I copy-paste parts of his work. It’s written way better than I could ever do. Don’t fix what isn’t broken, and give credits where credits are due.

Second note; in all secrets, Alan gives three to six examples to explain the magic. Be curious, buy the book, and unravel all copywriting secrets yourself. 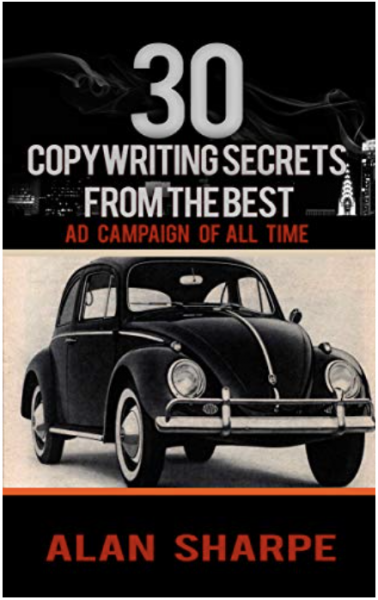 30 Copywriting Secrets from the Best Ad Campaign of All Time by Alan Sharpe, or go to www.sharpecopy.com

Secret 1: Write a weak headline if your visual is strong

‘If you read just about any book about copywriting, you’ll hear that your headline is the most important part of your copy. You’ll hear something like this: “Eight out of 10 people who look at an advertisement read the headline first, so make sure your headline names what you are promoting and describes a benefit of using the product.” In other words, use your headline to sell. That is the common wisdom.’

‘Well, Volkswagen turned that wisdom on its head.’

‘Some of the headlines had only two words for crying out loud. The most famous headline in the campaign had only one word in it. Some headlines stated the obvious. Others were simply boring. And yet the headlines did an amazing job.’ 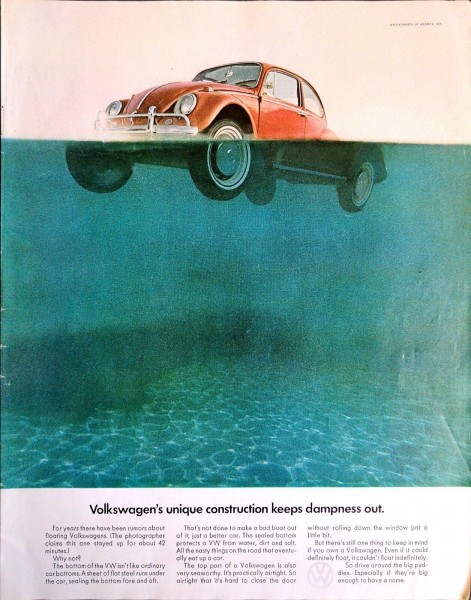 ‘This headline qualifies for the Oscar nomination for “Most boring headline of all time.” “Volkswagen’s unique construction keeps dampness out.” That’s the kind of thing an engineer would say.

That headline on its own would put most potential customers to sleep. And put car dealers out of business.

But paired with a strong visual, it works.’

Secret 2: Your headline and your visual need to get married

‘As you write your headlines, always aim to achieve synergy. Synergy is the interaction of two things to produce a combined effect that is greater than the sum of the two parts.’

‘The rule for creating synergy is that neither your headline nor your visual should be able to work on their own.’ 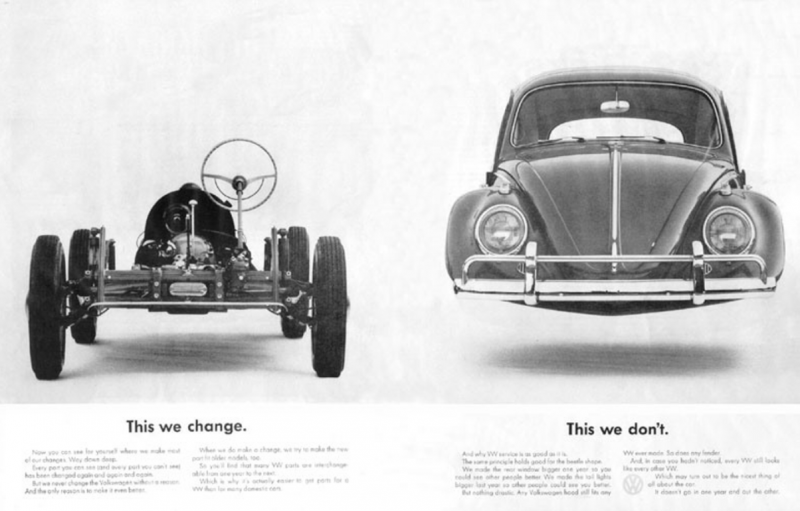 ‘The secret to creating synergy between a headline and a visual is to make sure your headline is cryptic and your visual is just as cryptic. Contrary to popular opinion, you rarely want your headline to say everything that needs to be said in order for your prospective buyer to act.’

Secret 3: Your headline must compel the buyer to read your body copy. Period.

‘David Ogilvy once said that, “On the average, five times as many people read the headline as read the body copy. When you have written your headline, you have spent eighty cents out of your dollar.”’

‘I disagree. Your headline is only effective if it compels your prospect to read your body copy. If your prospect reads your headline and then turns the page or clicks away from that website, you haven’t just spent eighty cents out of your dollar. You’ve spent the whole dollar, with nothing to show for it.’

‘Headlines serve one essential goal: Compel potential customers to read your copy. That’s it. No more. Interrupting people isn’t enough. Grabbing their attention isn’t enough. Your headline must motivate them, tease them, intrigue them and compel them to read what you have to say in your body copy.’

‘The ad agency for Volkswagen back in the 1960s was Doyle Dane Bernbach. Their creative team discovered that one of the easiest ways to get potential buyers to read an ad was to make the prospects ask themselves a question.’ 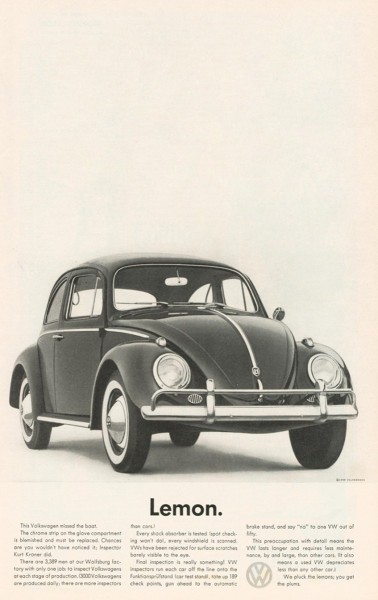 ‘Take this famous ad, for example. The headline says the car in the picture is a lemon. Why? You have to read the ad to find out.’ 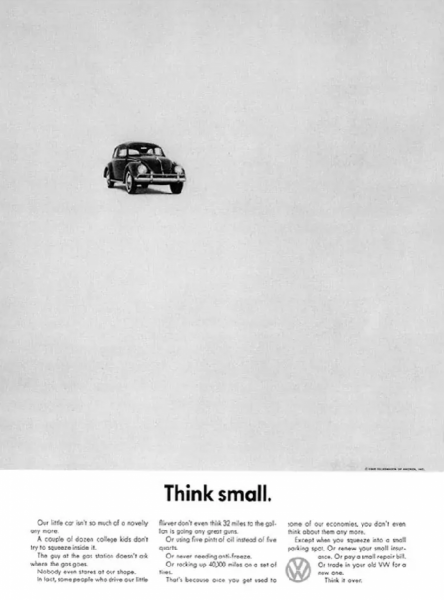 ‘Consider this ad. The headline tells you to think small. The image is of a small car. Why should you think small? Read the body copy and find out.’ 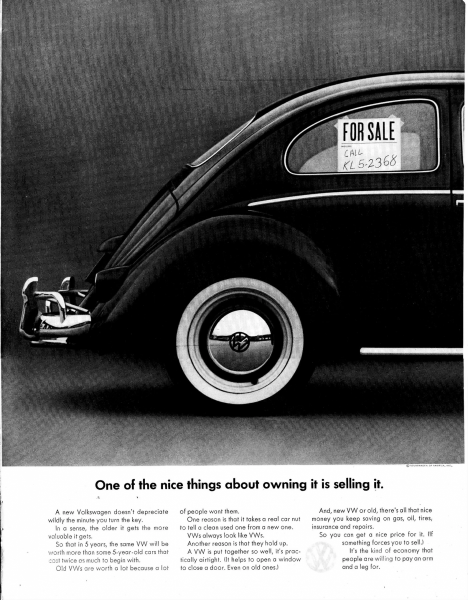 ‘Why is one of the nice things about owning a Volkswagen, going to sell it?’

‘You’ll notice that the secret to this tactic of writing headlines is that it arouses curiosity. Curiosity is one of the strongest drives that anyone can have. People will go to great lengths to satisfy their curiosity.’

Secret 4: Your headline better be a zinger if your visual is lame

‘Your first job as a copywriter is to interrupt people. No one is going to read your copy until you can first grab their attention and get them to pay attention to you. In print advertising and online, you only have two ways to grab people’s attention: a great headline, or a great visual.’

‘Of the two, visuals are better at grabbing attention than headlines are. So, if you have a funny or clever or quirky or intriguing image at your disposal, use that to grab your prospect’s attention. But what can you do if you don’t have a strong visual? What if your product is boring to look at?’ 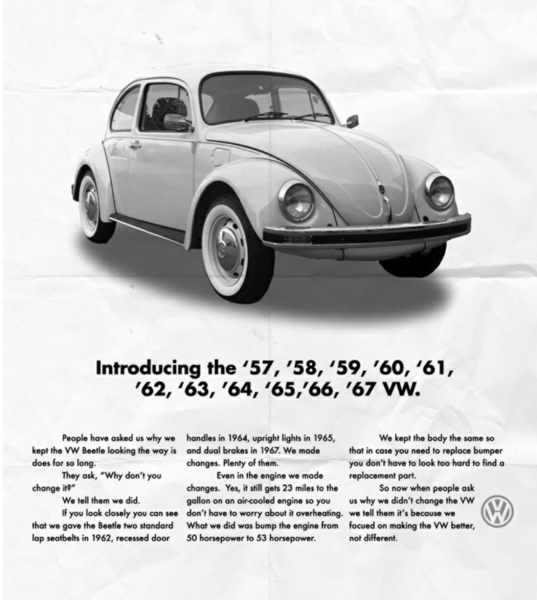 ‘Here’s an example of what I mean. I think you’ll agree with me that the visual in this ad isn’t going to win any awards for creativity. But the headline, now that’s creative. You see, the one thing that was different about the Volkswagen was that the body didn’t change from year to year. If you bought a Volkswagen in 1967 the body looked just like the body of the 1957. All that Volkswagen changed during those ten years was the insides of the vehicle.’

Secret 5: If in doubt, ask a question

‘But a clever copywriter, especially one who had a deadline to meet, could take that basic fact and give it a tweak by putting a question mark at the end.’ 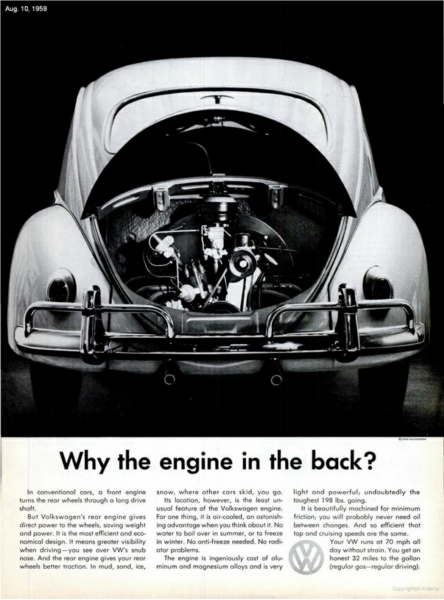 ‘Here’s another example. As you probably know, the engine in the Volkswagen wasn’t in the front. It was in the rear, mounted over the rear tires. This was a unique feature of the car that made the car lighter but gave it greater traction in the snow.’

‘But you can’t just write a headline that says, “The engine is in the back.” That simply states a feature of the car. Plus, it prompts the reader to ask, “The engine’s in the back? So what?”’

‘But turning the feature into a question piques your curiosity. “That’s a good question… Why IS the engine in the back?” you have to read the body copy to find out.’

‘Which brings up a vital point. Turning your headline into a question is an easy and effective way to persuade your prospective customer to read your body copy. No one wants to leave a question unanswered once their curiosity has been raised. They will read the body copy to satisfy their curiosity.’

‘By the way, headlines that are questions are not just for making product features more interesting. When Volkswagen wanted to make a point about its competitors or about its potential buyers, it often did so in the form of a question. That’s because posing an unpleasant truth as a question instead of as a fact softens the truth.’

‘With a little creative thinking, you can turn just about any statistic, harsh truth, boring fact, product feature or marketplace trend into a question that makes your potential buyers stop and think for a minute. And that, after all, is the main purpose of a headline, isn’t it?’

Secret 10: Headlines are for features, images are for benefits

‘One of your main jobs as a copywriter is to translate product features into benefits. People buy benefits, not features. Just so we’re clear: a feature is what a product does, a benefit is what that feature does for me.’

‘Your challenge, of course, as a copywriter, is figuring out how to describe product benefits in such a way that potential customers understand what you are saying. Your challenge is especially tough in print advertising, especially with headlines.’

‘In print advertising, one of the most effective ways to communicate product benefits is by demonstrating them with a visual.’ 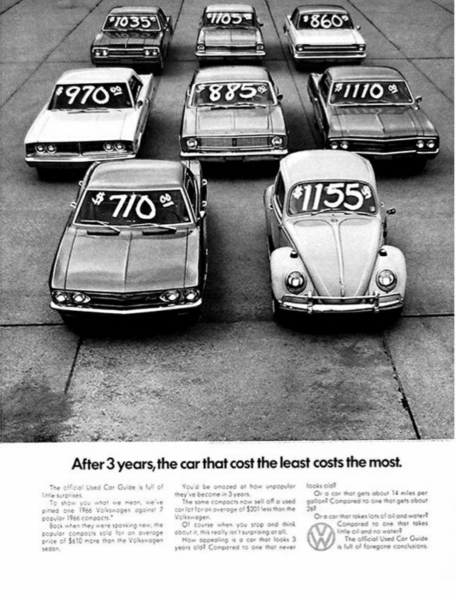 ‘But how do you communicate that benefit in an original way? With a headline that states the feature and a photo that communicates the benefit.’

‘Check out that headline: “After three years, the car that costs the least costs the most.” That is the feature clearly stated. Volkswagens hold their value.’

‘Now check out the visual. It communicates the benefit of buying a Volkswagen. You earn more money when you sell your car.’

‘The headline states the feature. The image demonstrates the benefit.’

Content and social is no humdrum magical millennial sh*t that needs a totally different approach. Grabbing someone's attention didn’t change over the years.

Be inspired and learn from what is proven. In this case, the Volkswagen ads developed by DDB and unraveled by Alan Sharpe. 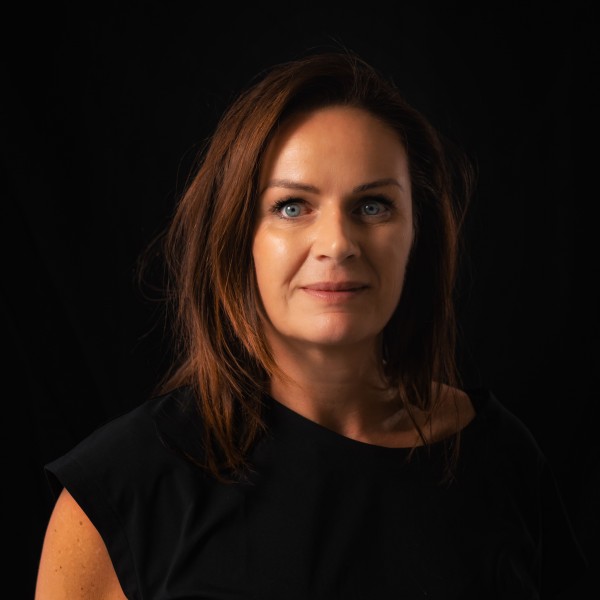 Headlines are today's social caption or title for a content item. Learn from what worked in the past.

Stay up to date

I'll keep you posted, with a newsletter. Yes. Old school. And yes, I love newsletters because they do the job

Easy does it. Subscribe to my LinkedIn newsletter to get the content automatically. Why on LinkedIn? As I feel no urgency to manage and maintain two newsletters, one from my newsroom (here) and one …
Read more
Tags
basics
about me

All you need to know, and what I didn't

Getting reach on LI is an algorithm game. And that changes every few weeks. What was hot and happening then is the opposite right now (February 2023).Honestly, I was absolutely ignorant about using …
Read more
Tags
basics
social
LinkedIn

How to nail employer branding content and get noticed

Very simple, have fun. Be proud of what you do and share this with the world. Noting more, nothing less. Don’t overcomplicate; no need to spend big on polished content assets.Especially in the …
Read more
Tags
basics
recruitment

Marketing and HR have more in common than you would expect at first glance. They seem like two different species. However, if there’s one department besides marketing that has to sell the company, …
Read more
Tags
basics
recruitment
strategy
Back to newsroom